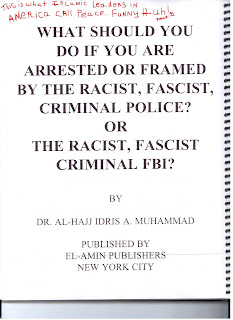 This is the type material CAIR supports.  This 81 page manual directed against the FBI and other U.S. law enforcement is found in many mosques, and endorsed by CAIR.

It is requested every American Patriot  contact the FBI Minneapolis office and respectfully request they cancel their planned 18 Sept 2019 town hall with CAIR in St. Cloud, MN.  If they do not stop, American Patriots must file law suits against the FBI and FBI Agent (Michael Melcher) who is going to sit on stage with a Hamas terrorist group.

Last week I talked with the Media rep (Kevin Smith) from the Minneapolis FBI office. He was very professional and we had a very respectful conversation.  I was concerned though when he mentioned the FBI had been requested by the Human Rights Commission to be a participant for the 'hate crime' town hall, and had subsequently learned later CAIR was going to be a participant.  He said it would not have been right to cancel once they had already committed.  I was stunned and asked Smith what if the FBI would have found out the non peaceful, hate filled KKK had been invited, would they have cancelled?  He said, "of course, but that is like comparing apples to oranges.  Yes Patriots I was stunned.  He was essentially saying the FBI does not consider CAIR to be a hate group as the KKK is.  This floored me.  Federal judges and the DOJ have both based on an overwhelming amount of evidence said on record that CAIR is a front group in America for the U.S. designated Muslim terrorist group Hamas.  What more reason does the FBI Minneapolis need to cancel?

President Trump (who is the ultimate boss of the FBI likely does not know the FBI is meeting with a terrorist group.  Patriots should respectfully contact their Congress and Senate reps to make them aware of this meeting between the FBI and with America's top Islamic terrorist supporter and hate crimes supporter (CAIR).  Also contact the White House switchboard to pass this information along.  Please be respectful at all times and keep in mind that the majority of our FBI street level agents understand their supervisors are in bed with CAIR and do not like their partnership no more than any American does.  Street level FBI Agents have previously told me there is a 'civil war' going on within the FBI. Street level agents want the management within the FBI to follow the U.S. Constitution and stop playing politics, particularly when they side with socialist liberals who care less about America than any other American group in our nations history. Here are some guidelines when calling the FBI:


Here are Kevin Smith's Phone numbers: FBI office (763) 569-8095
or you can call or text him on his cell at (612) 280-9062
​When you call:
Use Adina's article (above) as a reference and for talking points
Be RESPECTFUL
Give concerns in a clear and concise manner
Do not argue
Stick with facts
Our FBI should not be meeting with CAIR! If they want to have a meeting on Hate Crimes it must be separate.  If you are told it is not their event they were only invited ask him: If the KKK was invited would you still attend the event?
A terrorist group, CAIR, is absolutely able to be compared in hate-filled ideology to other hate filled groups such as the KKK. We do not find it acceptable that our Federal Bureau of Investigation as a law enforcement group should be working with this kind of group. Same for the St. Cloud Police Chief.